So, you want to know about prize money in tennis? You are wondering how much elite players earn, and are curious about life as a professional. Is it a life of privilege for all, earning millions while playing the game we love? Well, wonder no more, the Bros have you covered with our detailed breakdown.

Our analysis will almost certainly make you envious, but it may surprise you for very different reasons too. Prize money in tennis varies wildly. From grand slam winning, multi-millionaires, to journeymen and fledgling pros, life on tour can mean very different things depending on your level.

Tennis Prize Money at the Different Levels of the Game

The big names and the biggest stages on which they play are familiar to us all. And thanks to social media we have a window into their world beyond the court. Private jets, lucrative brand deals, and A-list friends are commonplace, but this is not real life for tennis players at every level.

For the majority of players, life on tour is tough. Prize money seldom covers a player’s expenses and it may come as a surprise just how little some professionals earn. Here we explore each level of the professional game and assess what prize money is on offer.

Prize Money on the ITF Tours

Life in the paid ranks starts with the ITF Futures Tour for men and for female players, the ITF Women’s Tour. This level is the foundation from which many of today’s superstars have graduated.

It is home for many new professionals and elite juniors allowing them to earn official ranking ATP points as they begin their quest to join the higher echelons.

Prize money at this level is very modest with both men and ladies competing for tournament funds totaling between $15,000 and $25,000.

Winners take home anything between $2000 and $4000 while first-round losers earn a meager cheque relative to the expense associated with travel, accommodation, and all sundry costs. Expenses that can often include equipment with many players having no brand deals at this level. Consequently, early-round losses for ITF Futures players can often result in a net loss for that week.

And if you want a real-life example of how tough things are for players at this level, we dive into this – later in this article.

Prize Money on the Challenger Tours

The next level for professional players is the ATP Challenger Tour and WTA Challenger Series for men and ladies respectively. Here the prize money increases significantly. But again, players are battling for prize pots that are a fraction of what is made available to the game’s elite.

In 2021, ATP Challenger Tour players competed for prize money ranging from $36,680 to $156,240 per tournament, whereas their WTA counterparts contested similar purses. For tournament winners, on average, this equated to a payday of around $21,000 to go with the winner’s trophy.

Things will change dramatically in 2023 however. A huge cash injection being made by the ATP Tour is set to elevate prize money by 60% for Challenger Tour players.

The ATP recently announced an increase in total prize money for the 2023 season which sees their total commitment reach $21.1m over 195 tournaments. Furthermore, they have simplified the tournament ranking system.

You may hear of tournaments being classified as ATP 125 or ATP 150 and have wondered if that has something to do with prize money. Well, it refers to ranking points. The winner of an ATP 125 event garners 125 ATP ranking points. Naturally, prize money tends to increase in correlation with the ranking points on offer.

And along with increasing prize money, the ATP Tour will also revamp its ranking point classifications for Challenger Tour level tennis. In 2023 players will compete in ATP 50, ATP 75, and ATP 100 tournaments with some of the more obscure classifications (ATP 90, ATP 110) now defunct.

Finally, 2023 also sees the introduction of three ‘premium’ ATP Challenger Tour events. Players will not only play for 175 ranking points but will also duel over a $220,000 prize fund per tournament – unprecedented at this level.

Clearly (and by their own admission), the ATP Tour comprehends the importance of tennis at this level and its responsibility to help incubate future superstars. With increased financial commitment the tour is attempting to attract burgeoning talent, making it a more desirable and watchable pursuit.

Prize Money on the Main Tours

As we have seen, tennis can be complicated when it comes to the many levels and associated prize money. And once we graduate to the main tours, the theme of tiers continues with tournaments ranging from ATP 250 to Grand Slam events.

In terms of how the various tournament levels translate into prize money, the below table gives a flavor of what players at most levels play for. 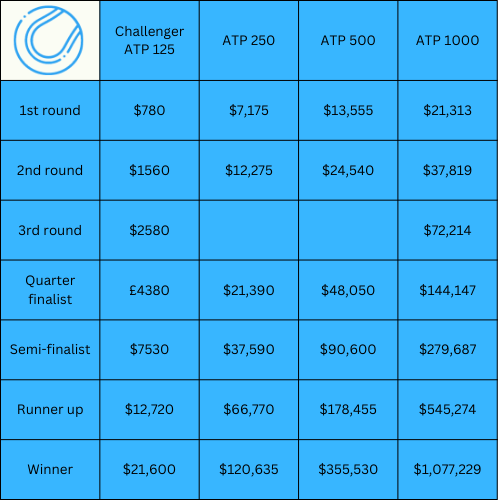 To illustrate the divide between levels, we can see that a winner of a Challenger 125 tournament roughly earns the same prize money as a first-round loser in an ATP 1000 tournament. Of course, you have to be pretty exceptional to be eligible for an ATP 1000 event, having ascended the ranks through ability, and in that respect, tennis can be considered a merit-based hierarchy.

The ultimate ambition for a tennis professional is to win one of the four Grand Slam tournaments. And while most players will say that tennis at this level is about history not prize money, the financial rewards are eye-watering as the below table shows. 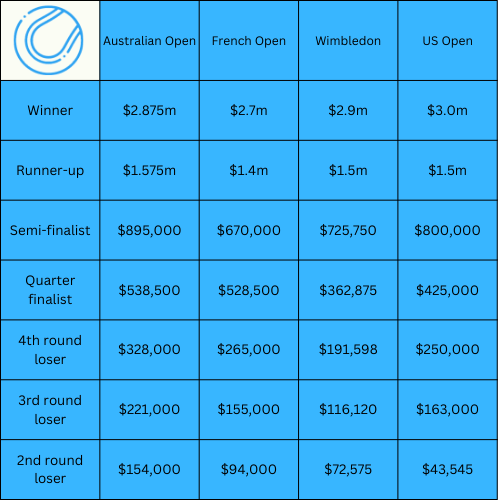 Simply by reaching each of the four slams a player can earn over $250,000 and for many players that alone is a primary objective – to get through qualifying and potentially progress enough to help bankroll future months of travel, hotels, and coaching.

For those gifted enough to take home one of the most coveted trophies in tennis, the prize money is mere frosting on what is a very rich cake.

Emma Raducanu is the most recent example of how snagging a slam can transform a player’s profile and indeed bank balance. The young Brit pocketed a cool $2.5m for her 2021 US Open win, but that figure has been eclipsed many times thanks to a queue of blue-chip sponsors eager to capitalize on her success. A list that includes Tiffany, British Airways, Nike, Evian and Porsche.

Additionally, Emma’s sponsors also include Wilson Tennis. She uses their Blade frame and if you are curious about her racket of choice we have a comprehensive resource dedicated to the Blade line.

Raducanu reportedly earns north of $9m each year from her portfolio of sponsors, a figure that dwarfs her 2022 on-court earnings of $697,000. A theme that is best illustrated if we study Roger Federer’s lifetime earnings.

During his career Roger Federer used his Wilson RF97 to earn over $130m earned from prize money alone. However, it is believed that Roger’s ‘total’ lifetime earnings comfortably surpasses $1bn, garnered from endorsement deals, lucrative appearance fees and merchandise sales. Proof indeed, that grand slam success is only the start – a gateway to a world that Futures players can only dream about.

And if this was not enough, the eight most successful players at the season-end (also the year’s highest earners) qualify for the season-ending ATP and WTA Finals tournaments. These limited field events see players from each respective tour battle for prize money totalling $14.7m for the men and $5m for the ladies.

If you still have an appetite for yet more wealth, there are always exhibition matches and bespoke tournaments such as the Laver Cup. It is not uncommon for elite players to command north of $500,000 for personal appearances and for those selected for the Laver Cup, they can pocket between $150,000 and $250,000 depending on the result.

For the majority of players, the struggle is real

Media outlets tend to focus primarily on major tournaments, narrowing the public’s focus exclusively upon the higher echelons of tennis. The reality however, is stark and for every Emma or Roger, there are countless players who routinely lose money in their quest to play professional tennis.

Serving for the Wimbledon title is pressure but playing to merely pay this week’s bills and to travel next week is something else entirely. Expenses (per season) for a traveling professional can range from $40,000 for those on the strictest of budgets, to $200,000 for players electing to take their coach and/or physical trainer on tour. Figures that few lower-tier players can cover without winning consistently.

Recently, BBC Sport interviewed Algerian WTA player Ines Ibbou, who highlighted the struggle faced by players outside of the top 200. A world where prize money fails to cover all expenses and luxuries like free rackets and strings are non-existent. A sobering read that highlights the huge gulf between aspiring pros and the established elite.

Prize Money In Tennis and the Gender Debate

No discussion of prize money in tennis would be complete without considering the topic of gender inequality in tennis – a perennial hot topic.

Both women and men enjoy the same pay scale when it comes to the Grand Slams, albeit that was a protracted process with Wimbledon becoming the last slam to invoke parity in 2007, decades after the US Open adopted this policy in 1973. But beyond the major tournaments, there still exists a significant disparity in prize money between both sexes.

Even though tennis has the lowest gender pay gap of all professional sports, men still earn 34% more prize money on average than their female counterparts. Of course, many argue WTA players consistently play less tennis (a maximum of 3-sets) compared to men who can play a maximum of 5-sets (in Grand Slams only), but nonetheless, it will remain a contentious issue until the gap narrows even further.

Tennis is fundamentally a business competing for the interest of sports fans in general. Naturally, elite players who generate attention and attract the biggest audiences monopolize the prize money ranks. But nonetheless, it still feels as though the gulf between elite-level players and new professionals is disproportionate – notwithstanding the disparity in prize money between genders.

It would be criminal for a player with genuine talent to leave tennis due to affordability issues, and this is not just the Bros opinion.

Novak Djokovic and fellow pro, Vasek Pospisil, launched a players-only council in 2020 with the remit of giving a voice to and being supportive of, players at all levels. The premise was not a redistribution of wealth, more so the creation of a body that is more aware and supportive of lower-tier tennis – notably to help create sponsorship opportunities for more players.

The Professional Tennis Players Association (PTPA) as it is called was not widely accepted, however. Considered by many to be a breakaway and divisive faction it has yet to receive widespread support, even though its intentions appear credible.

And so the existing dynamic and the same questions remain about an imbalance in the sport and how best to address it. But one thing is true, the rewards for those who make it are life-changing and available to all, providing you have the required tools to reach the summit.

Supercharge Your Doubles With TheTennisBros.com

The Art of Volleying

Become clinical at the net with our in depth volleying walkthroughs!

Outsmart your opponent with superior tactics! Our strategies can be quickly implemented for instant results!

Get Our Free Guide to Supercharging Your Tennis Equipment!

Sign up to receive your Free Guide to Supercharging Your Tennis Equipment, straight to your inbox!

Want to know the exact dimensions of a tennis court? When you are watching tennis on TV, it can be difficult to figure out exactly how big a tennis court is. Don’t worry, we’re here to answer your question for you. So, let’s take a detailed look at tennis court…

The Best Tennis Players of All Time (Top 10 Male + Female)

Whatever sport you're talking about, choosing the best players of all time is always going to be a contentious debate. When it comes to the best tennis players of all time, the problem is it’s particularly hard to compare players across different eras.